The piece had its world premiere on 3 November 2012 at St. Ignatius of Antioch in New York City, performed by Ghostlight Chorus and conducted by Dr. Evelyn Troester DeGraf. 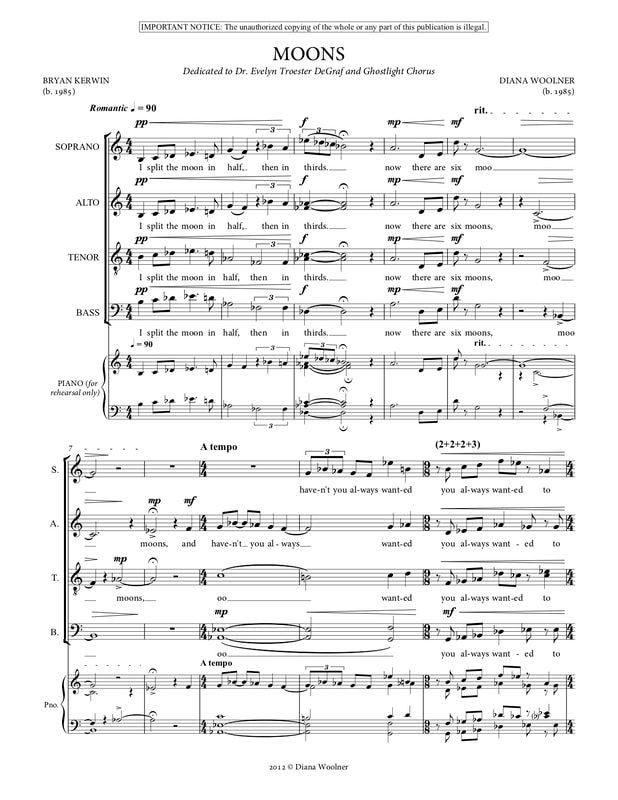 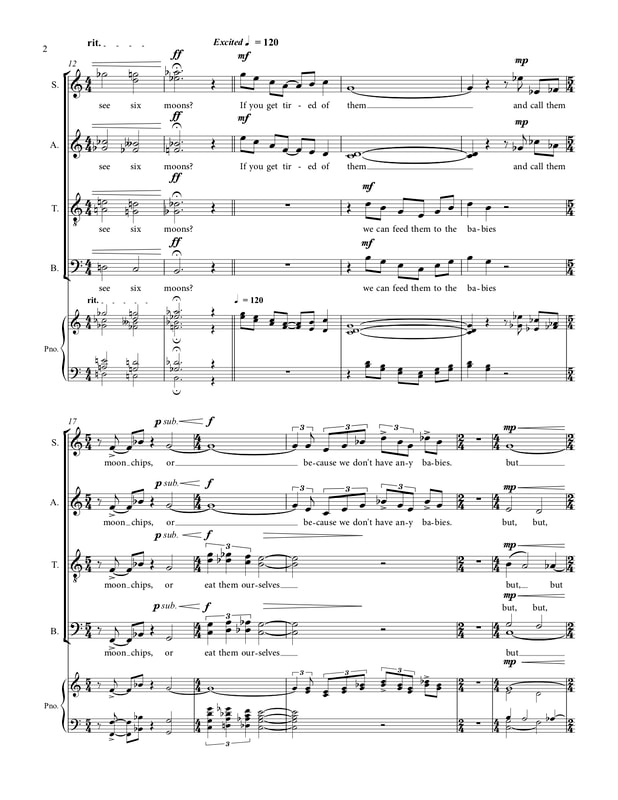 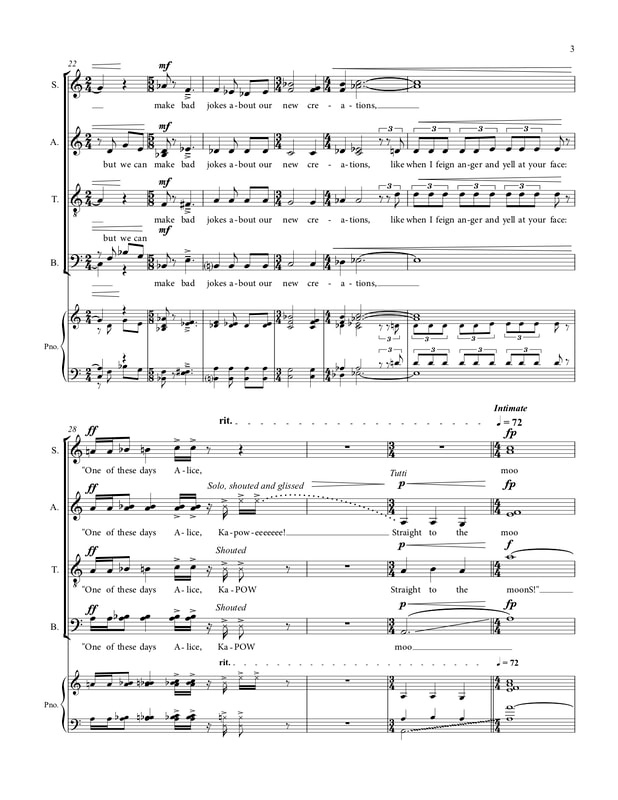 FORECAST is a setting of three existential limericks and two weather forecasts which highlights the random and mysterious nature of the universe...

The piece was developed during Choral Chameleon's Summer Institute in 2012, and had its world premiere on 30 October 2014 at The Church of Notre Dame in New York City, performed by Ghostlight Chorus and conducted by Dr. Evelyn Troester DeGraf.

This afternoon...sunny and windy.
Temperatures in the mid to low sixties.
Winds up to ten to fifteen miles per hour.

There was an Old Man who said 'Well!
Will nobody answer this bell?
I have pulled day and night,
til my hair has grown white,
But nobody answers this bell!'

Tonight...mostly cloudy.
Temperatures in the mid to low forties.
Winds up to 65 miles per hour.
​
There was a Young Lady of Sweden,
Who went by the slow train to Weedon;
When they cried, "Weedon Station!"
she made no observation,
But thought she should go back to Sweden.
BACK TO TOP

THE FIRE CYCLE is an energetic and wild ride through an imaginative and emotionally evocative narrative. The rapid text flies by in a series of metric changes, images of an apocalyptic world in and outer world on fire. It is a story of rebirth through destruction...but ultimately a story of love.

​The piece had its world premiere on 24 May 2019 at LP Studios in Glendale, CA, performed by The Contemporary Choral Collective of Los Angeles (C3LA), conducted by David Conley. It is published by See-A-Dot Music.

There are trees and they are on fire. There are hummingbirds and they are on fire. There are graves and they are on fire and the things coming out of the graves are on fire. The house you grew up in is on fire. There is a gigantic trebuchet on fire on the edge of a crater and the crater is on fire. There is a complex system of tunnels deep underneath the surface with only one entrance and one exit and the entire system is filled with fire. There is a wooden cage we’re trapped in, too large to see, and it is on fire. There are jaguars on fire. Wolves. Spiders. Wolf-spiders on fire. If there were people. If our fathers were alive. If we had a daughter. Fire to the edges. Fire in the river beds. Fire between the mattresses of the bed you were born in. Fire in your mother’s belly. There is a little boy wearing a fire shirt holding a baby lamb. There is a little girl in a fire skirt asking if she can ride the baby lamb like a horse. There is you on top of me with thighs of fire while a hot red fog hovers in your hair. There is me on top of you wearing a fire shirt and then pulling the fire shirt over my head and tossing it like a fireball through the fog at a new kind of dinosaur. There are meteorites disintegrating in the atmosphere just a few thousand feet above us and tiny fireballs are falling down around us, pooling around us, forming a kind of fire lake which then forms a kind of fire cloud. There is this feeling I get when I am with you. There is our future house burning like a star on the hill. There is our dark flickering shadow. There is my hand on fire in your hand on fire, my body on fire above your body on fire, our tongues made of ash. We are rocks on a distant and uninhabitable planet. We have our whole life ahead of us.
BACK TO TOP

BALOO BALEERIE is an arrangement of a very old lullaby, thought to have originated in Bressay (Shetland) near Northern Scotland.

Written during the global pandemic of COVID-19, this work had its world premiere on 9 August 2020 online during a live-streamed church service at St. Matthew's Episcopal Church in the Pacific Palisades, CA.

Translation
Baloo means "lullaby", and Baleerie is a gibberish word like lullaby. It's like singing, "Lullaby, lullaboo..."

There are two overarching organizing patterns in LIP SERVICE: the mechanical processes of firing a missile in parallel to the temporality determined by the criminalization of immigrants and its holding patterns—waiting in indefinite detention, suspense and immobility. The piece isolates and reorganizes selected musical and linguistic elements from the classic anthem "America the Beautiful" in patterns and combinations in which language never fully forms. The anthem is further presented via fractured rhythms rather than being treated lyrically or melodically.

IN PARADISUM (Into Paradise) is an interpretation of the rollercoaster of emotions one can feel during a funeral or memorial service.

Written during the global pandemic of COVID-19, this piece had its world premiere on 12 December 2020 during an online live-streamed concert. It was recorded by members of The Contemporary Choral Collective of Los Angeles (C3LA), and featured live shadow puppetry designed and performed by Miranda Kahn. 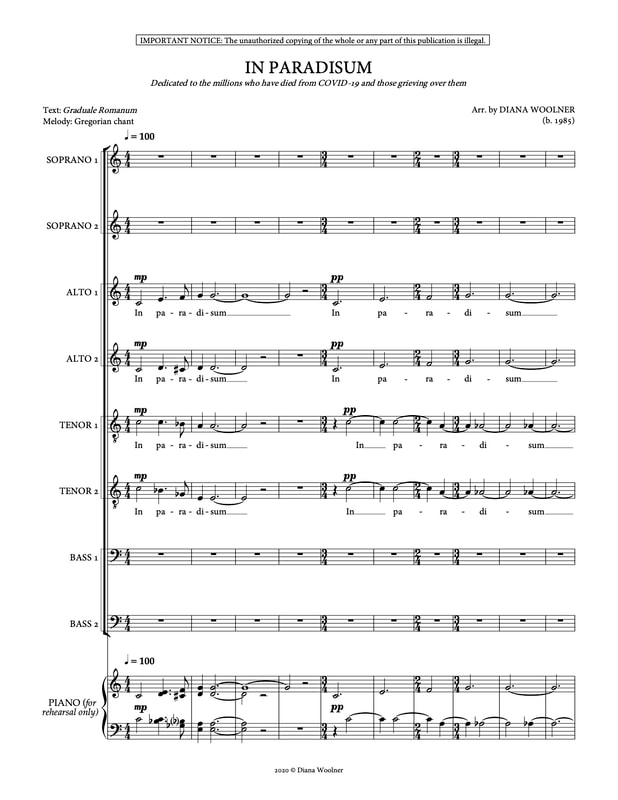 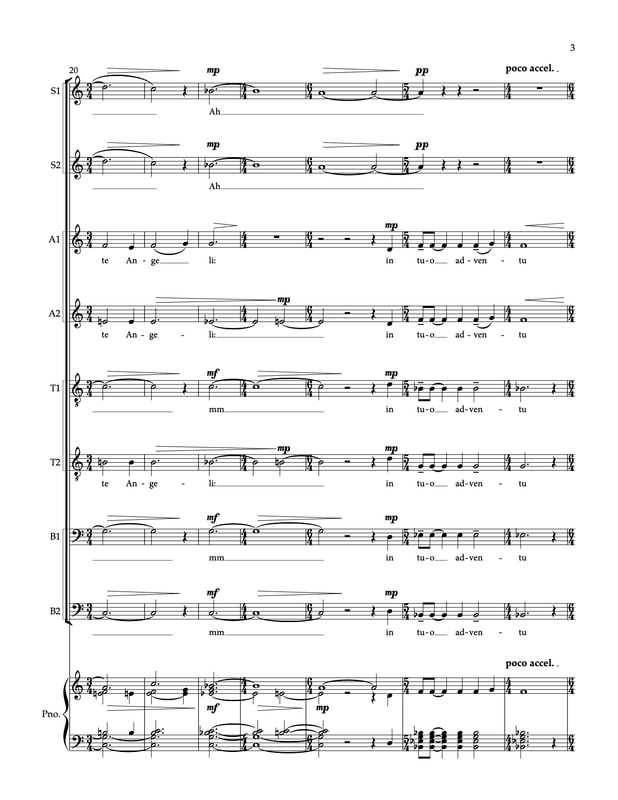 May the angels lead you into paradise;
may the martyrs receive you at your arrival
and lead you to the holy city Jerusalem.
May choirs of angels receive you
and with Lazarus, once poor,
​may you have eternal rest.
BACK TO TOP

THAT HOLY DREAM is a setting of Edgar Allan Poe's "A Dream", in which the narrator contemplates whether a nightmare is more favorable than a joyous daydream, believing the daydream would never be fully realized. The music wavers between major and minor modes, accentuating the protagonist's comparisons.

In visions of the dark night
I have dreamed of joy departed
But a waking dream of life and light
Hath left me broken-hearted.

Ah! what is not a dream by day
To him whose eyes are cast
On things around him with a ray
Turned back upon the past?

That holy dream that holy dream,
While all the world were chiding,
Hath cheered me as a lovely beam,
A lonely spirit guiding.

What though that light, thro' storm and night,
So trembled from afar
What could there be more purely bright
In Truth's day star?

A NOISELESS, PATIENT SPIDER is a setting of Walt Whitman's poem of the same name, published in an 1891 edition of "Leaves of Grass". It depicts a character contemplating their own soul and how it might relate to and fit within the unfathomably expansive universe.

A noiseless, patient spider,
I mark’d, where, on a little promontory, it stood, isolated;
Mark’d how, to explore the vacant, vast surrounding,
It launch’d forth filament, filament, filament, out of itself;
Ever unreeling them—ever tirelessly speeding them.

And you, O my Soul, where you stand,
Surrounded, surrounded, in measureless oceans of space,
Ceaselessly musing, venturing, throwing,—seeking the spheres, to connect them;
Till the bridge you will need, be form’d—till the ductile anchor hold;
Till the gossamer thread you fling, catch somewhere, O my Soul.

AURORA (ASTRONOMY) is both an educational and illustrative interpretation of the mysterious and majestic phenomenon aurora borealis (Northern Lights).

​This work was written for and premiered by the Brooklyn College Conservatory Singers as part of its residency program. It had its world premiere on Dec 12 2013 at Brooklyn College, Whitman Hall.

The text comes from the first few paragraphs of the Wikipedia article on "Aurora (Astronomy)", as it existed on Oct 1 2013.

An aurora (plural: aurorae or auroras; from the Latin word aurora, "sunrise"
or the Roman goddess of dawn) is a natural light display in the sky
particularly in the high latitude (Arctic or Antarctic) regions,
caused by the collision of energetic charged particles with atoms
in the high altitude atmosphere (thermosphere).
The charged particles originate in the magnetosphere and solar wind and, on Earth, are directed by the Earth's magnetic field into the atmosphere.
Most aurorae occur in a band known as the auroral zone,
which is typically 3 to 6 degrees in latitudinal extent and at all local times or longitudes. The auroral zone is typically 10 to 20 degrees from the magnetic pole
defined by the axis of the Earth's magnetic dipole.
BACK TO TOP

FRIDGE is a fast, silly and playful piece that ponders why it is so easy to get up out of your seat when working on something difficult. Its quick, repetitive and highly rhythmic gestures evoke both the physical movement of the body (to the fridge), as well as neurons firing. The urgent--almost heroic tone, at times--exists as an absurd contrast to the mundane action in the text.

The piece was commissioned as part of a "Silvestri in residence" program through Music Spoke called the "I Wonder" series. Each poem, all written by Charles Anthony Silvestri, started with the words "I wonder...". FRIDGE had its world premiere on May 18 2019 by the Central Bucks High School-West Choir, conducted by Joseph Ohrt.

I wonder why
I get up from my work, again,
and check the refrigerator.
Will some new delicious thing have appeared
that wasn't there before,
the last time I checked?
BACK TO TOP
Powered by